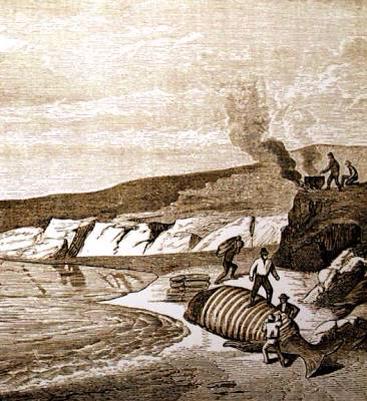 An ‘extraordinary supernatural occurrence’ took place on the coast north of Port MacDonnell in 1879 and created a great sensation. Walter and William Carrison had been at work for some little time obtaining oil from a stranded whale. A few days later they were out shooting and did not return to their tent until nightfall. Just at twilight William Carrison was loading his gun for a last shot, when all at once he heard a hideous yell and, turning his eyes in the direction from which the sound came, he observed what appeared to be a man of rather unusually tall stature making towards him. Carrison looked with a fixed gaze at the object and it appeared so weird and unearthly that his blood began to chill and his hair to bristle. On it came and as it approached yelled again. Carrison then put a cap on his gun and, taking aim, fired at the object which appeared to sink into the ground out of sight and left no trace behind. At the same time Walter Carrison, who was about a mile from his brother, saw a similar apparition and, having his gun loaded and capped at the time, fired. The object, too, appeared to have felt the shot and melted into thin air. Later, it was the general belief that the ghost, or ghosts, were of some persons who had been murdered near the spot where they were seen.

Voted Out of Office
Scroll to top Book online now!