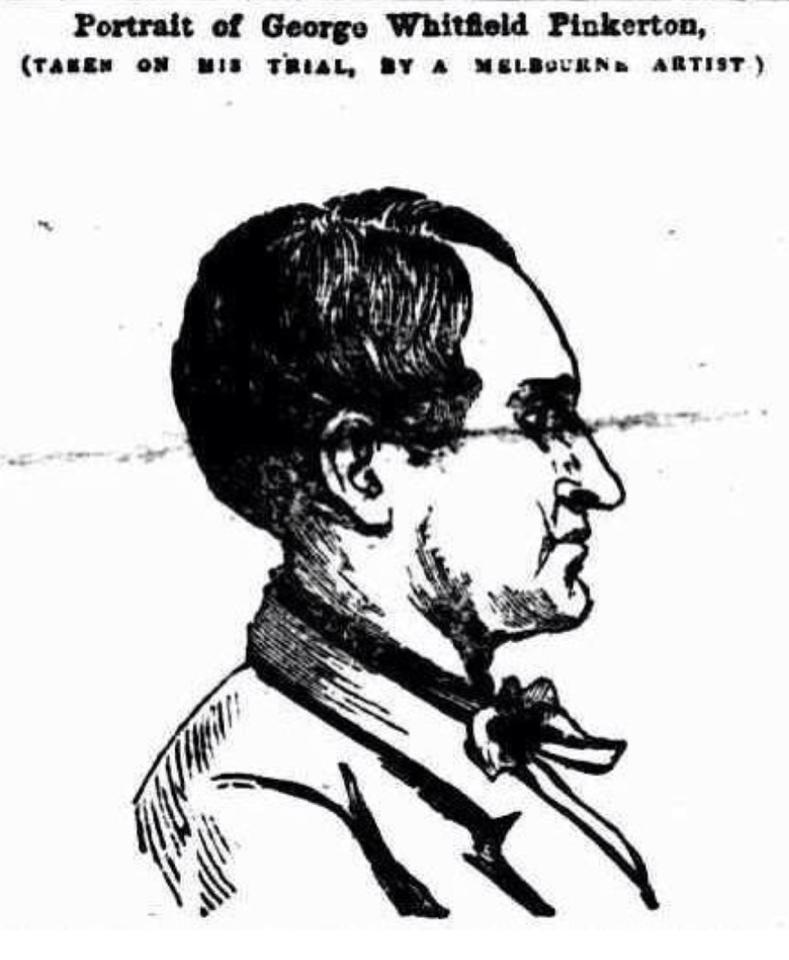 Shortly after eight o’clock, the extreme sentence of the law was carried into effect upon George Whitfield Pinkerton, the murderer of the unfortunate Mrs Smith and infant at Brighton, the particulars of which must fresh in the recollection of our readers. From the moment of Pinkerton’s condemnation, the Rev. Mr. Hetherington, Presbyterian minister, has been unremitting in his attention to him, and it is to be hoped that the Rev. gentlelman’s exertions have not been without their beneficial effects. The same apparent indifference to his fate which was manifested by the prisoner at his trial, was however persevered in to the last moment; no expression of regret for his enormous crime escaped him, and to those around he frquently ridiculed the only plea which could have assisted to save his life. His health had become much improved since his trial, and there can be no doubt he would, under skilful medical treatment, have fully recovered from the inflicted injuries, which it was at first thought would have proved fatal within a few hours of their infliction. During the night previous to his execution, Pinkerton slept soundly and on waking immediately remembered and remarked upon that being his last day upon earth. He attired himself in the suit which he had worn upon his trial and at an early hour was visited by the Reverend Mr. Hetherington, to whom he apparently attended with great attention till within a few moments of eight o’clock, when the wretched man who was so soon to terminate his career upon the scaffold, appeared in the passage, when, upon a signal from the Governor of the Gaol the executioner, who had been for some time in the western extremity of the Gaol, made an appearance, and commenced the task of pinioning the prisoner’s arms. It has been remarked by persons in the habit of attending public executions that it is at this moment the courage of the prisoner usually gives way. Such was certainly not the case on the present occasion, the prisoner remaining as firm as a rock, and immediately afterwards the white cap having been adjusted, he expressed his readiness to meet his doom. On entering the yard in which the instrument of death was erected, the sight which usually strikes terror to the hearts of the most hardened, had no effect on him. He mounted the scaffold with a firm step, attended by the Reverend gentleman we have named, and on the very instant that he reached the platform, the rope was adjusted round the criminal’s neck, the bolt was drawn, and all was over. Death, to all appearance, did its work in a moment, without creating even the slightest appearance of a struggle in the victim. On gazing at the suspended and stiffened corpse, the thought intruded itself that such a scene was more adapted for the barbarous ages than an enlightened nineteenth century. The number of spectators was quite as large as usual on such occasions, notwithstanding the inclemency of the weather, and amongst them, to their shame be it said, we observed many females and children. The body, after hanging an hour, was cut down, and upon examination, the features were found to be distorted to a far less extent than is usually the case. It has been stated to us upon good authority, that Pinkerton within the last few days admitted to a person who visited him, that his original statement to the effect that the attack upon poor Smith was unpremeditated, was untrue. Doctors Youl, Barker, and Hutchison, held a post mortem examination on the head of the murderer, and gave a written opinion which could not fail to prove satisfactory to the Executive Council that the brain was in a sound healthy state, and denoting nothing to lead to the supposition that he had ever been deranged.

Railway Employees in the Dock