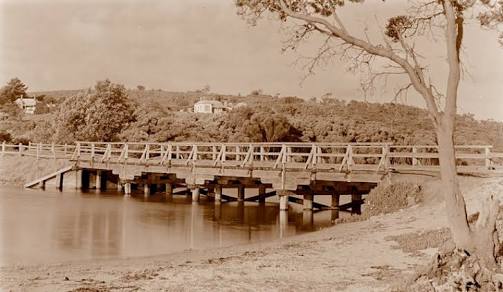 ON THIS DAY – April 17, 1945
Youth on Trial
An admission that he had shot Thomas Clarke because he had looked a bit nervous was the allegation made by the Crown in the Criminal Court yesterday, when Kevin Albert Joiner, 18, of McCormac place, Melbourne, appeared before Mr Justice Lowe and a jury on a charge of having murdered Thomas Charles Clarke, 25, soldier, at Mount Martha on April 17.
In opening the case for the Crown, Mr R. M. Nolan, said that on April 17, accused, with Clarke and a lad named Harris, had broken into the Maryport guest house, Mount Martha. After having placed the spoils of the robbery in four suit-cases they divided the contents outside. Harris was left with the suit-cases, and Clarke and Joiner went down towards the esplanade. Joiner said to Clarke “Go and see what time the bus will be passing for Frankston.” As Clarke went Joiner fired into his left side, and again fired to the right. After Clarke slumped into the scrub accused went over to him and fired into the back of his head from a distance of about three feet. It was alleged on behalf of the Crown that Joiner had admitted that while they were in the guest house he had noticed that Clarke looked a bit nervous, and he decided to shoot him.
The hearing is unfinished.
Mr R. M. Nolan prosecuted for the Crown. Mr J. P. Bourke (instructed by Messrs O’Donohue and Green) appeared for accused.