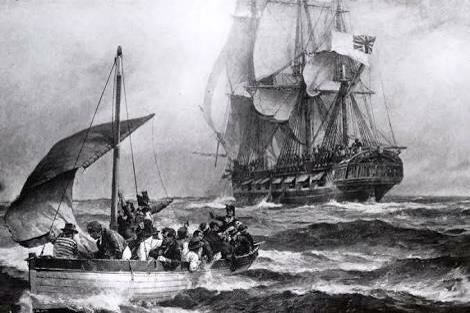 Three weeks into a journey from Tahiti to the West Indies, the HMS Bounty is seized in a mutiny led by Fletcher Christian, the master’s mate. Captain William Bligh and 18 of his loyal supporters were set adrift in a small, open boat, and the Bounty set course for Tubuai south of Tahiti. In December 1787, the Bounty left England for Tahiti in the South Pacific, where it was to collect a cargo of breadfruit saplings to transport to the West Indies. There, the breadfruit would serve as food for slaves. After a 10-month journey, the Bounty arrived in Tahiti in October 1788 and remained there for more than five months. On Tahiti, the crew enjoyed an idyllic life, reveling in the comfortable climate, lush surroundings, and the famous hospitality of the Tahitians. Fletcher Christian fell in love with a Tahitian woman named Mauatua. On April 4, 1789, the Bounty departed Tahiti with its store of breadfruit saplings. On April 28, near the island of Tonga, Christian and 25 petty officers and seamen seized the ship. Bligh, who eventually would fall prey to a total of three mutinies in his career, was an oppressive commander and insulted those under him. By setting him adrift in an overcrowded 23-foot-long boat in the middle of the Pacific, Christian and his conspirators had apparently handed him a death sentence. By remarkable seamanship, however, Bligh and his men reached Timor in the East Indies on June 14, 1789, after a voyage of about 3,600 miles. Bligh returned to England and soon sailed again to Tahiti, from where he successfully transported breadfruit trees to the West Indies. Meanwhile, Christian and his men attempted to establish themselves on the island of Tubuai. Unsuccessful in their colonizing effort, the Bounty sailed north to Tahiti, and 16 crewmen decided to stay there, despite the risk of capture by British authorities. Christian and eight others, together with six Tahitian men, a dozen Tahitian women, and a child, decided to search the South Pacific for a safe haven. In January 1790, the Bounty settled on Pitcairn Island, an isolated and uninhabited volcanic island more than 1,000 miles east of Tahiti. The mutineers who remained on Tahiti were captured and taken back to England where three were hanged. A British ship searched for Christian and the others but did not find them. In 1808, an American whaling vessel was drawn to Pitcairn by smoke from a cooking fire. The Americans discovered a community of children and women led by John Adams, the sole survivor of the original nine mutineers. According to Adams, after settling on Pitcairn the colonists had stripped and burned the Bounty, and internal strife and sickness had led to the death of Fletcher and all the men but him. In 1825, a British ship arrived and formally granted Adams amnesty, and he served as patriarch of the Pitcairn community until his death in 1829. In 1831, the Pitcairn islanders were resettled on Tahiti, but unsatisfied with life there they soon returned to their native island. In 1838, the Pitcairn Islands, which includes three nearby uninhabited islands, was incorporated into the British Empire. By 1855, Pitcairn’s population had grown to nearly 200, and the two-square-mile island could not sustain its residents. In 1856, the islanders were removed to Norfolk Island, a former penal colony nearly 4,000 miles to the west. However, less than two years later, 17 of the islanders returned to Pitcairn, followed by more families in 1864. Today, around 40 people live on Pitcairn Island, and all but a handful are descendants of the Bounty mutineers. About a thousand residents of Norfolk Island (half its population) trace their lineage from Fletcher Christian and the eight other Englishmen.