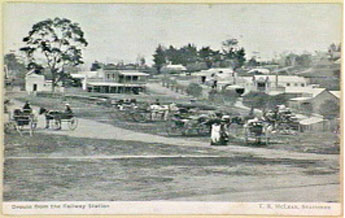 The trial of Patrick John O’Keefe, on a charge of the murder of his brother-in-law (Frederick Richard Cohen) during a domestic scuffle at Drouin on May 13, concluded at Sale court house. The jury, after deliberating for an hour and a half, returned a verdict of not guilty.

Patrick O’Keefe shot his brother-in-law, F. R. Cohen, the licensee of the Royal Hotel.  A dispute is said to have occurred between Cohen and his wife, and O’Keefe entered the room in response to the request of his sister. A violent quarrel is said to have followed, and O’Keefe is alleged to have seized a breechloader and deliberately aimed at Cohen, and the charged entered the deceased’s neck. O’Keefe subsequently gave himself up, saying, ”I’ve murdered my brother-in-law.” He was arrested on his own accusation. The accused is 21 years of age, and is described as being of a quiet, inoffensive disposition.

Australian $1 banknote is replaced with a $1 coin.
Scroll to top Book online now!