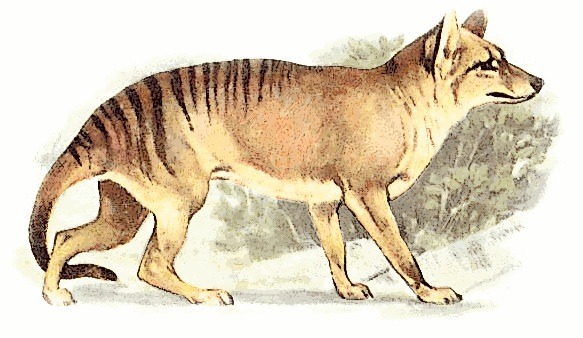 The Tasmanian tiger, known also by its palaeontological nickname of Thylacine, was a carnivorous marsupial of Australia. It was once believed to roam the entire Australian mainland, as well as parts of New Guinea. Its disappearance from the mainland is believed to have been due to increased competition for food which resulted from the introduction of the dingo by the Aborigines. The Thylacine was up to 110cm in length, with a strong, stiff tail that was half the length of its body again. At its shoulder, it stood about 60cm tall. The Thylacine had tawny grey-brown fur, and around 16 black or brown stripes on its back, mainly at the tail end. The first evidence of the existence of such a creature came when Abel Tasman discovered Tasmania, which he named Van Diemen’s Land, in 1642. Upon the shores of the island, one of Tasman’s crewman, F. Jacobszoon, described seeing “footprints not ill-resembling the claws of a tiger”. French exploration provided confirmation of the Tasmanian tiger when French naturalist Jacques-Julien Houtou de Labillardière, who was on Rear Admiral Bruni d’Entrecasteaux’s expedition to “New Holland”, made what is considered to be the first definitive sighting of the Tasmanian tiger, on 13 May 1792. The last known Thylaicne died in the Hobart Zoo on 7 September 1936, a victim of exposure and starvation caused by lack of understanding of the animal’s needs. Since then, there have been numerous sightings of the Thylacine, but none have been confimed.