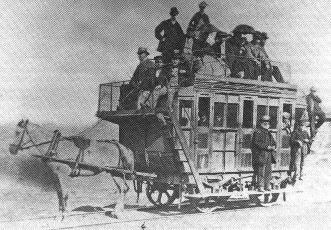 Victoria is generally accepted as the first place in Australia to have had a completed railway line. The first steam train in Australia made its maiden voyage on the 12th of September 1854, running between Flinders Street and Sandridge, now Port Melbourne. However, the first railway ever to run in Australia was actually in South Australia. South Australia was one of only two Australian states to have been founded by free settlers (the other being Western Australia), and the only state that remained entirely free of convicts during its early history. Its capital city, Adelaide, was designed by Colonel William Light, who arrived in South Australia in 1836. The southern colony quickly grew, fed by immigrants and free settlers in search of a better life or escaping religious persecution. South Australia was known for a number of “firsts”. It was the site where Australia’s first paddlesteamer was launched. It was the site from which both the first east to west crossing and successful south to north crossing of the continent was undertaken. It was also the first colony to implement a railway. South Australia began operations of horse-drawn trains on the 18th of May 1854. The line ran from Goolwa, on the Murray River, to the harbour at Port Elliot, and was used to move supplies between craft navigating the Murray River, and coastal and ocean-going vessels. After numerous vessels were shipwrecked at the entrance to the bay, the terminus was moved from Port Elliot and the line extended to Victor Harbor, in 1864.