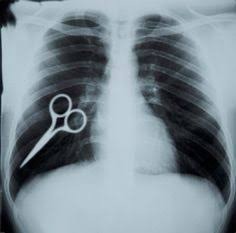 Pat Skinner had an operation in the St George Hospital in Sydney on this day in 2001 to have part of her colon removed because doctors were afraid that polyps growing there might by cancerous. Fortunately, they were found to be benign, but the 69 year old suffered from agonising pain for another 18 months until an X-ray revealed a pair of 17cm surgical scissors in her abdomen. It ached terribly whenever Pat sat or lay down until the scissors were discovered and were removed in a second operation.