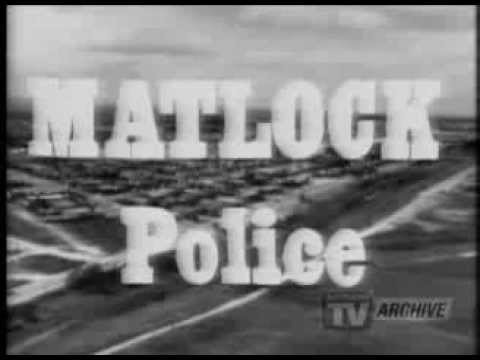 Matlock Police was an Australian television police drama series made by Crawford Productions for the 10 Network between 1971 and 1976. The series focused on the police station and crime in the Victorian town of Matlock and the surrounding district, and the backgrounds and personal lives of the main policemen.

The series was the 10 Network’s attempt to come up with a police show to rival Homicide (shown by the Seven Network) and Division 4 (on the Nine Network). Matlock Police was different from its Melbourne-based predecessors by being set in a small country town, the fictional Matlock, Victoria (a real Matlock does exist in Victoria, but it is much smaller than the town depicted by this series, which is loosely based on Shepparton). These program’s introduction featured an overhead shot of a town with a divided road, thought to be of Bairnsdale in Victoria. Series writers had a reference manual giving full details of the town’s geography, amenities, social structure, etc., as well as that of the surrounding area – neighbouring towns included Wilga, Chinaman’s Creek, Possum’s Creek and Burrabri, and there was an offshoot of the Great Dividing Range called the Candowies. The town’s colourful history included the local Aboriginal tribe (the ‘Bangerang’), the town founder (George Matlock), a gold rush, a bushranger (‘Holy’ Joe Cooper – so called both for his theft of a shipment of holey dollars and because he was a preacher) and a town patriarchy (the Falconers). About the only landmark the Matlock district lacked for dramatic purposes was a beach. The first episode was broadcast in Melbourne on 22nd of February 1971. Initially filmed in black and white, the series switched to colour in episode 162, “Loggerheads”. Matlock Police was cancelled in 1975 after 229 episodes had been produced. Matlock Police Station was in fact the Ringwood Police Station in Melbourne. A new frontage has been added to the building.