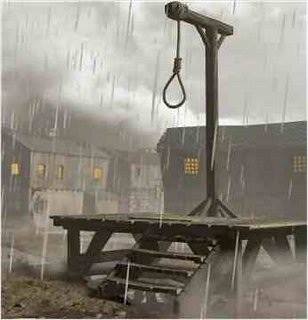 Executions have been a part of Australian history since the beginning.

The indigenous people had death sentences that were carried out under Aboriginal customary law.

The first executions carried out under European law in Australia took place in Western Australia in 1629, when Dutch authorities hanged the mutineers of the Batavia.

The first execution after European settlement came just weeks after the arrival of the First Fleet when Thomas Barrett was hanged from a tree on February 27, 1788 for plotting to rob the Government stores.  He was buried near the Gallows tree.

Executions began to be abolished in the states and territories starting with Queensland in 1922 and Western Australia the last in 1984.

The last person to be sentenced to death was Brenda Hodge in Western Australia in 1984 for murder but it was commuted to life imprisonment.

Victoria has the dubious honour of having the final woman and final man executed in Australia with Jean Lee on 19th February 1951 and Ronald Ryan on 3rd February 1967.

In 2010, Federal Parliament passed laws that prevent the death penalty from being reintroduced by any state or territory in Australia.

The Last Executions in Australia