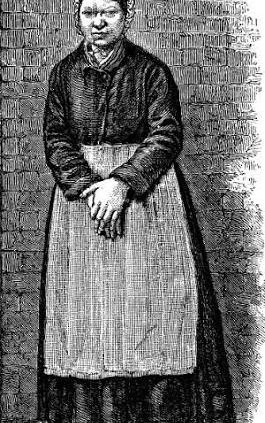 In the obituary notices in The Argus newspaper, it appeared the death of a person
named Elizabeth Wickets, at the great age of 103 years. She was a native of Paisley, in Scotland, but at an early age went to Lancashire, where she was
employed as a cotton-weaver. At the time when steam power looms were introduced there was a great uprising of the ignorant weavers, who thought they would lose their employment, and Wickets, who was then a remarkably tall and strong young woman, joined in the disturbances and destroying of looms, and for this, with many others, was transported to Tasmania. In that colony she married a man named John Wickets, who was her second husband, and about the time of the gold fever, the pair came over to this colony of Victoria. The man was a gipsy, and earned a living as a travelling tinker and conjuror. He was very clever at legerdemain, and was well known in Melbourne and Collingwood as “Jack the
Conjuror ” His wife used to accompany him in all his rambles, and when either had
taken a little too much drink, the other would wheel him or her in a barrow
to a hut in which they resided in what was then bush, but now forms the outskirts of Collingwood. About eight years ago “Jack ‘ received a sunstroke while on a journey up country, and returned to Melbourne, where he died in the hospital. The wife, who was now getting infirm, went into the Benevolent Asylum, but could not rest there, because, as she said, her old man’s last words to her were that she should not
allow herself to be beholden to the “pariah,” and leaving the institution, she went to
Sergeant Pewtress, whose duties had made him acquainted with her, and through his good offices she was brought under the notice of Mr Sturt, P M , who allowed her a pension of 2s a week She received some aid from the Ladies’ Benevolent Society, and was provided with lodgings in Collingwood by a family who had known her in Tasmania, and thus her last days were passed in comfort. Her age was computed from accounts she had given of the minor historical facts she remembered, and the calculation agreed with her own statements. Elizabeth was born in 1772.

P.O.W On The Run
Scroll to top Book online now!