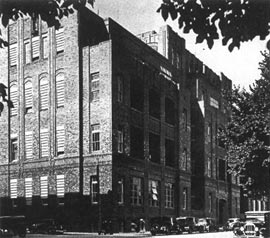 Detectives have searched without avail for an Australian soldier who was seen in a Fitzroy hotel with Miss Mary Agnes Earls, 42, invalid pensioner, and for a woman who was in her company a few hours before her death on July 14. It has not been ascertained whether the soldier was a casual acquaintance or a friend of Miss Earls. Detectives are anxious to clear up the direction in which Miss Earls went when they separated. The soldier it is thought could give this and other important information It has been established that from 4 40pm until about 6pm on the day before her death Miss Earls was near the vacant allotment adjoining St Vincent’s Hospital, where her body was found. Questions to which police are seeking answers are Where did Miss Earls go after meeting the soldier outside the hotel on the corner of Brunswick and Gertrude sts? Did she meet her death in a house near by, and was her body then carried to where It was found? Did she go to the vacant allotment voluntarily, and was she killed and concealed under cover of darkness? Why did the murderer strip and scratch the body, and how was the clothing disposed of? Motive for the crime is also puzzling police. Does the absence of her handbag suggest robbery? Was the crime one of vengeance or rage?