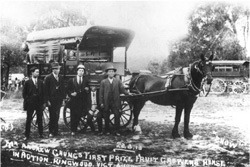 The trial of Robert Landells for the murder of Peter Joseph Sherlock, at Ringwood, on July 20, was concluded, before Mr. Justice Hodges. The jury returned a verdict of guilty. The prisoner, in reply to the usual question, said he had nothing to say. Sentence of death was then passed upon the prisoner. Landell was executed at old Melbourne gaol on the 16th October 1889.