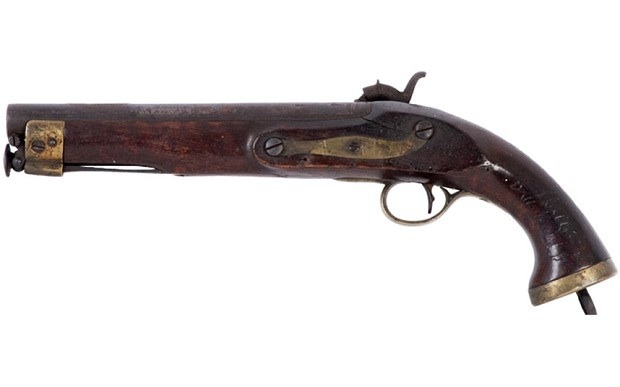 A gun belonging to the brother of notorious Australian outlaw Ned Kelly and used in the gang’s infamous last stand against police fetched to $125,000 when it was auctioned on the 21st of November 2012. The East India Company cavalry pistol, which belonged to Kelly’s younger brother Dan and has his name and the year 1876 engraved on the walnut stock, was sold by Melbourne’s Leski Auctions. Auctioneer Charles Leski expected the vintage muzzle-load single-shot percussion pistol, which uses powder and a lead ball instead of a cartridge, to fetch up to Aus$125,000 (£81,700). Dan Kelly had the pistol with him during the 1880 siege of the Glenrowan Inn, when his outlaw brother and their gang made one last stand against police. Everyone but Ned Kelly – wearing his iconic home-made plate metal armour and helmet – was killed in the showdown. Kelly was later hanged at Melbourne Gaol, famous for uttering the final phrase “such is life”. “The Kelly Gang – Ned, Dan, Steve Hart and Joe Byrne – has loomed large in Australia’s consciousness for more than 130 years,” Mr Leski said.