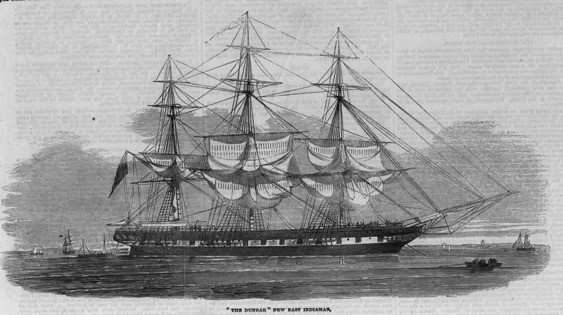 The Dunbar was a first class sailing vessel, and, at 1,320 tonnes, was the largest of the time to be built at Sunderland shipyards in England. The vessel left Plymouth on 31 May 1857, carrying 63 passengers and 59 crew. On the night of 20 August 1857, the Dunbar approached the heads of Sydney Harbour. It seems that the captain, though experienced in Sydney waters, was disoriented by the driving rain and gale conditions. Possibly he mistook ‘The Gap’, a spectacular ocean cliff near South Head, for the entrance to Sydney Harbour. The swell pushed the ship into the reef at the foot of South Head and the Dunbar began to break up immediately. Only one person survived: 23 year old Irish seaman James Johnson, who was flung into the cliffs where he managed to gain a foothold, remaining there until he was noticed clinging to a ledge in the morning. A mass funeral was held on 24 September for those who died in the shipwreck, as many of them were unidentified. A monument to the victims still sits at St Stephen’s Cemetery, Camperdown.