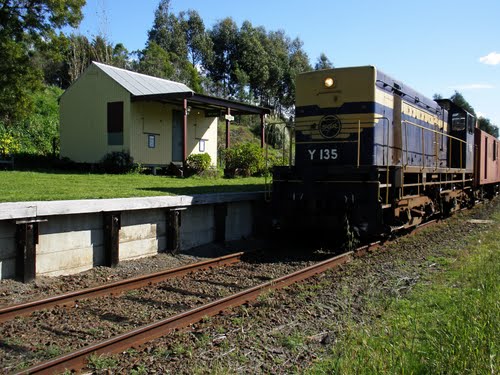 Considerable interest was taken at Loch on September 7 in the investigation held before Dr. Cole, P.M., city coroner, at the Loch Courthouse, into the deaths of Elizabeth Dunbabin, spinster, who. was found dead in a paddock half a mile west of the Woodleigh railway station, on Tuesday, August 24, and Peter Allan, aged 33, married, a railway navvy, who poisoned himself in his tent at Woodleigh on the night of August 20. The postmortem examination on the body of Miss Dunbabin, who was 44 years of age, showed that she had been strangled by someone, who had attempted to criminally assault her. After Allan bad committed suicide evidence was procured that left practically no doubt that he was the murderer, and the crime had been committed while Miss Dunbabin, who had come from Melbourne by rail the previous night, was walking to her home at Grantville some four miles distant.

Superintendent Fowler of Sale looked after the. case on behalf of the police; Mr. Maxwell appeared on behalf of the relatives of Peter Allan, and addressed this, urging that it had not been shown that Allan committed the crime, whatever-ground there might be for suspicion.

Dr. Cole said that on certain points there was practically no difficulty, So far as Elizabeth Dunbabin was concerned, in finding that she was murdered, subsequent to an attempt to violate her. The attempt failed, and the reasons were plain, as the postmortem examination showed. There was no doubt that two struggles took place during the attempt at violation, and it was clear that the person who attempted the violation murdered the woman. He found in her case that she died from strangulation. As to Peter Allan, it was clear that he committed suicide. The question was, Was he the murderer? After reviewing the evidence, the Coroner said.that nothing further was required to sheet the crime home to Allan. He was the man. It was an atrocious crime, to be attributed to disease, and probably aggravated by drink.