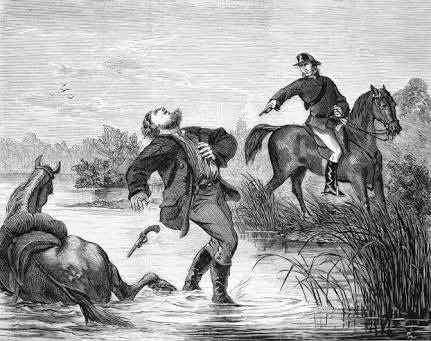 Bushranger Captain Thunderbolt was born Frederick Ward at Wilberforce near Windsor, NSW, in 1836. As an excellent horseman, his specialty was horse stealing. For this, he was sentenced in 1856 to ten years on Cockatoo Island in Sydney Harbour. On 1 July 1860, Ward was released on a ticket-of-leave to work on a farm at Mudgee. While he was on ticket-of-leave, he returned to horse-stealing, and was again sentenced to Cockatoo Island. Conditions in the gaol were harsh, and he endured solitary confinement a number of times. On the night of 11 September 1863, he and another inmate escaped from the supposedly escape-proof prison by swimming to the mainland. After his escape, Ward embarked on a life of bushranging, under the name of Captain Thunderbolt. Much of his bushranging was done around the small NSW country town of Uralla. A rock originally known as “Split Rock” became known as “Thunderbolt’s Rock”. After a six-year reign as a “gentleman bushranger”, Thunderbolt was shot dead by Constable Alexander Walker in May 1870.