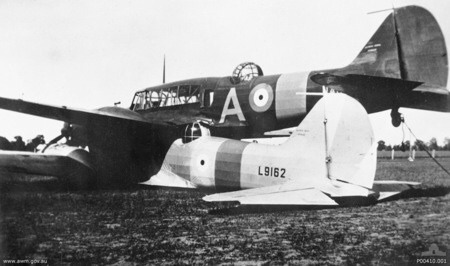 On 29 September 1940, a mid-air collision occurred over Brocklesby, New South Wales, Australia. The accident was unusual in that the aircraft involved, two Avro Ansons of No. 2 Service Flying Training School RAAF, remained locked together after colliding, and then landed safely. The collision stopped the engines of the upper Anson, but those of the machine underneath continued to run, allowing the pair of aircraft to keep flying. Both navigators and the pilot of the lower Anson bailed out. The pilot of the upper Anson found that he was able to control the interlocked aircraft with his ailerons and flaps, and made an emergency landing in a nearby paddock. All four crewmen survived the incident, and the upper Anson was repaired and returned to flight service. The Ansons were at an altitude of 1,000 feet (300 metres) over the township of Brocklesby, near Albury, when they made a banking turn. Fuller lost sight of Hewson’s aircraft beneath him and the two Ansons collided amid what Fuller later described as a “grinding crash and a bang as roaring propellors struck each other and bit into the engine cowlings”. The aircraft remained jammed together, the lower Anson’s turret wedged into the other’s port wing root, and its fin and rudder balancing the upper Anson’s port tailplane. Both of the upper aircraft’s engines had been knocked out in the collision but those of the one below continued to turn at full power as the interlocked Ansons began to slowly circle. Fuller described the “freak combination” as “lumping along like a brick”. He nevertheless found that he was able to control the piggybacking pair of aircraft with his ailerons and flaps, and began searching for a place to land. The two navigators, Sinclair and Fraser, bailed out, followed soon after by the lower Anson’s pilot, Hewson, whose back had been injured when the spinning blades of the other aircraft sliced through his fuselage. Fuller travelled five miles (eight kilometres) after the collision, then successfully made an emergency pancake landing in a large paddock 6 kilometres (4 mi) south-west of Brocklesby. The locked aircraft slid 180 metres (200 yards) across the grass before coming to rest. As far as Fuller was concerned, the touchdown was better than any he had made when practising circuits and bumps at Forest Hill airfield the previous day. His acting commanding officer, Squadron Leader Cooper, declared the choice of improvised runway “perfect”, and the landing itself as a “wonderful effort”. The RAAF’s Inspector of Air Accidents, Group Captain Arthur “Spud” Murphy, flew straight to the scene from Air Force Headquarters in Melbourne, accompanied by his deputy Henry Winneke. Fuller told Murphy:

“Well, sir, I did everything we’ve been told to do in a forced landing—land as close as possible to habitation or a farmhouse and, if possible, land into the wind. I did all that. There’s the farmhouse, and I did a couple of circuits and landed into the wind. She was pretty heavy on the controls, though!”

Murder of a Paramour
Scroll to top Book online now!