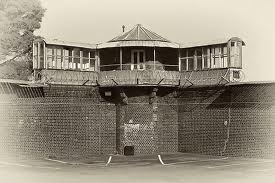 The eccentric conduct of a Chinaman named Hey Soon, a month ago led lo his being sent to the Geelong gaol, and he became so much enamoured of that establishment that when his term of imprisonment expired on this day on 1906 he refused to leave. He would not even part with his prison clothes, and when an attempt was made to dispossess him of tho garments he became, so excited that it was not deemed advisable then to release him. He was formally charged with offensive behaviour at the police court, and remanded for one week.