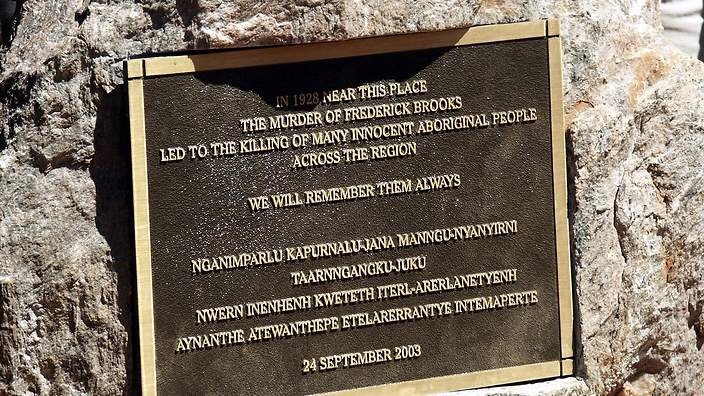 The Coniston Massacre was the last known massacre of Australian Aborigines. Occurring at Coniston cattle station, Northern Territory, Australia, it was a revenge killing for the death of dingo hunter Frederick Brooks, who was believed to have been killed by Aborigines in August 1928. Constable William Murray, officer in charge at Barrow Creek, investigated and came to the conclusion that the killing had been done by members of the Warlpiri, Anmatyerre and Kaytetye people. There were no witnesses, and apparent inconsistencies in Murray’s report were never questioned. Murray took matters into his own hand. Over the next few days, up until 30 August, he shot 17 members of the Aboriginal tribes he believed were responsible, and claimed his actions were made in self-defence and that each tribal member he had killed was in possession of some item belonging to Brooks. In the ensuing weeks, Murray again encountered several groups of Aborigines while investigating another non-fatal attack on a settler named Nugget Morton at Broadmeadows Station. Together with Morton, one other white man and an aboriginal boy, Murray embarked on a campaign of revenge, during which another 14 Aborigines were killed. He returned to Alice Springs with his report on 18 October 1928. Murray was never punished for his actions. On the contrary, the Board of Enquiry members were selected to maximise damage-control. It was believed at the time that Murray’s actions were appropriate for the circumstances. The Central Land Council organised the seventy-fifth anniversary of the massacre, commemorated near Yuendumu on 24 September 2003.