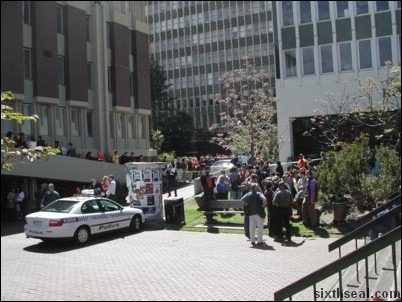 The Monash University shooting refers to a shooting in which a student shot his classmates and teacher, killing two and injuring five. It took place at Monash University in Melbourne, Victoria, Australia on 21 October 2002. The gunman, Huan Yun Xiang, was acquitted of crimes related to the shootings due to mental impairment, and is currently under psychiatric care. Several of the people present in the room of the shootings have been commended for their bravery in tackling Xiang and ending the shooting. At 11:24 a.m. on 21 October,Huan Yun “Allen” Xiang a commerce student at the university, armed with six loaded handguns, opened fire in room E 659 of the Menzies Building on Monash’s Clayton campus in an econometrics class containing twelve students. People in the classroom were initially confused by the noise and by Xiang screaming “You never understand me!” from the desk he was standing on. Xiang killed two students in the room: Xu Hui “William” Wu, an international student from Hong Kong and neighbour of Xiang’s in Melbourne; and Steven Chan, a student from Doncaster. Xiang wounded five others: lecturer Lee Gordon-Brown, who was shot in the arm and knee; student Daniel Urbach, who was wounded in the shoulder and arm; student Laurie Brown, who was wounded in the leg and abdomen; student Christine Young, who was shot in the face; and student Leigh Dat Huynh, who was discharged from hospital within a day. When Xiang stopped shooting and moved to switch weapons, Lee Gordon-Brown, the injured lecturer, grabbed Xiang’s hands as he reached into his jacket. Gordon-Brown and a student in the room, Alastair Boast, a trained wing chun practitioner, tackled him. Bradley Thompson later entered the room and discovered five guns in holsters around Xiang’s waist, including two Berettas, a Taurus, and two revolvers, as well as two magazines from near his hip. Gordon-Brown and Boast were assisted by a passing lecturer from a nearby room, Brett Inder, to restrain Xiang for thirty minutes until police arrived, while Thompson and university administrator Colin Thornby, provided first aid. They both received Red Cross “Community Hero” awards for their assistance. At least one injured student reportedly left the room and sought help for his injuries from security staff. Xiang was deemed by police to be unfit for interview but wrote a note referring to William Wu after his arrest saying “I finally ended WW’s life.” All classes in the Menzies Building were cancelled for the rest of the day and the university set up counselling stations.