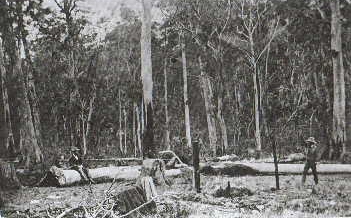 On the 26th October, 1878 Sergeant Michael Kennedy and Constables Lonigan, Michael Scanlan and Thomas McIntyre rode into the Wombat Ranges searching for Ned and Dan Kelly, who were wanted for the attempted murder of Constable Alex Fitzpatrick at Eleven Mile Creek, near Benalla, on 15th April, 1878. That evening the policemen established a camp near Stringbark Creek, and the following day Kennedy and Scanlan set off to patrol the area whilst McIntyre and Lonigan remained behind. Towards evening the camp site was attacked by the Kelly’s, together with their associates Steve Hart and Joe Byrne. Constable Lonigan was shot dead whilst Constable McIntyre was captured and held hostage. The outlaws then hid themselves around the camp, and left McIntyre on view as a decoy. When Kennedy and Scanlan returned Ned Kelly called on them to “bail up”, then almost immediately the outlaws began firing and the policemen were cut down. In the confusion McIntyre was able to escape and raise the alarm. Over the next two years the Kelly gang, as they became known, remained at large, only coming out of hiding to make two much publicised raids, one on the township of Euroa, and the other at Jerilderie. Finally, in June, 1880 they received information that an associate, Aaron Sherritt, had betrayed them, and a large contingent of police were travelling to Euroa by train to arrest them. The gang moved swiftly. They murdered Sherritt, took over the township of Glenrowan and imprisoned the residents, and wrecked the railway line in the near vicinity. They then settled down to wait, planning to set upon the police party after their train ran off the rails at the point of sabotage. A local resident managed to allow the gang to release him, and he warned the approaching police and averted a disaster. Soon after the gang were cornered in a local hotel. A siege developed and Dan Kelly, Steve Hart and Joe Byrne were killed. Ned Kelly managed to escape, and returned later in his famous “suit of armour”, and attempted to shoot it out with police. Soon overpowered, he faced trial at Melbourne for killing Lonigan, and was hanged at 10.00 a.m. on 11th November, 1880.