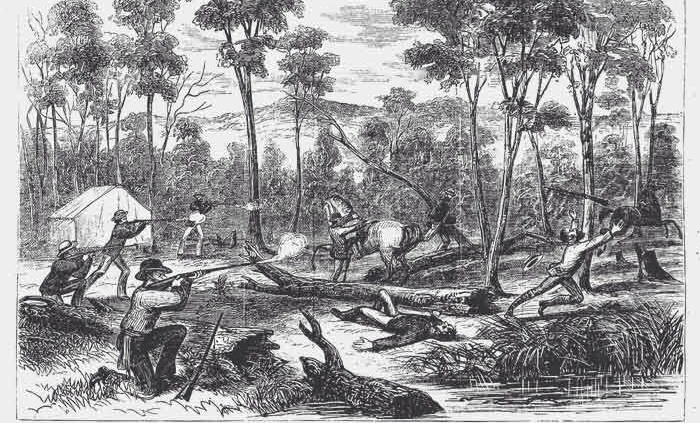 A group of four policemen from Mansfield set out to search for the Kelly brothers who they thought were hiding in the bush near Mansfield. They set up camp at Stringbark Creek on 25 October 1878, not knowing that the Kellys were living in a small hut on Bullock Creek, less than 1km away. The next day Kennedy and Scanlan went to search the nearby forest, while Lonigan and Constable Thomas McIntyre stayed at the campsite. The Kellys heard noises from the police camp and went to investigate. Ned Kelly decided to try and capture the policemen and take their guns, horses and food. He called on the two policemen to give themselves up. McIntyre raised his hands, but Lonigan attempted to run and reached for his gun. Ned Kelly shot him in the eye. The bushrangers then waited for Kennedy and Scanlan to return. When they rode into the camp, McIntyre warned them that the Kelly brothers were there, and to give themselves up. Scanlan went to unsling his rifle and was shot dead immediately. Kennedy jumped off his horse, and while shooting at the Kellys ran into the bush. Ned and Dan Kelly chased after him, shooting him twice as they hunted him for over 800 yards. Kennedy surrendered. Kelly walked up to him and shot him again in the chest and killed him. During the earlier shooting at Scanlan and Kennedy, McIntrye was able to get onto Kennedy’s horse and escaped. He reached Mansfield the next day to report the deaths. Ned Kelly, Dan Kelly, Joe Byrne and Steve Hart were made outlaws, and a large reward was offered for their capture, either dead or alive. The three murdered policemen were taken to Mansfield and buried in the cemetery. A large memorial, funded by public donations, was built in the main street of Mansfield.

The Australian Government returns ownership of Uluru to the traditional own...