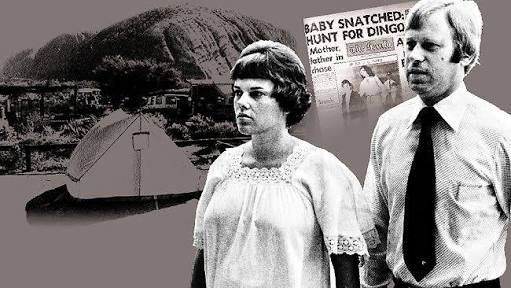 Lindy Chamberlain convicted of the murdering her baby at Ayers Rock.

Uluru, formerly Ayers Rock, is a huge monolith in central Australia. It has long been a popular tourist destination, but gained a new notoriety on the night of 17 August 1980, when two-month-old Azaria Chamberlain went missing from the nearby camping ground. When baby Azaria disappeared, her mother Lindy claimed that a dingo had stolen her baby. No trace of the child was ever found, although her bloodstained clothes were found a week later by another tourist. At the first inquest into her death, commencing in February 1981, it was found that the likely cause of Azaria’s disappearance was a dingo attack. Police and prosecutors, unhappy with this judgement, moved for a second inquest which began on 13 September 1981. This time, the new finding was made that Azaria had been killed with a pair of scissors and held by a small adult hand until she stopped bleeding. Lindy Chamberlain was convicted of murder on 29 October 1982, and her husband Michael was found guilty of being an accessory. Lindy Chamberlain’s acquittal came four years later when a matinee jacket worn by Azaria was found partially buried in a dingo’s lair at Ayers Rock. New evidence was presented showing that earlier methods of testing evidence had been unreliable, and no conviction could be made on those grounds. Both Chamberlains were officially pardoned, Lindy was released, and eventually awarded AU$1.3 million in compensation for wrongful imprisonment.