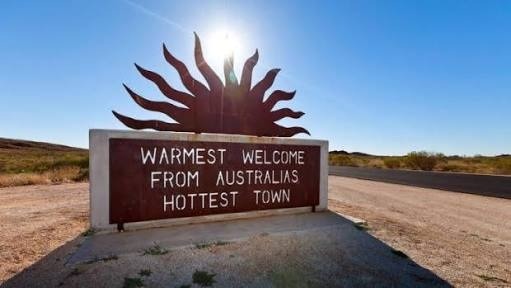 Marble Bar is a tiny town in the Pilbara region of north-western Western Australia. The discovery of gold in 1890 by Francis Jenkins led to the establishment of a town, which was officially gazetted in 1893. The town derives its name from a nearby jasper formation which was mistaken by early settlers for a bar of marble. This rock formation is also known as the Marble Bar, and the nearby Marble Bar Pool is a popular picnic and swimming area for both tourists and the people of the township. During the goldrushes, Marble Bar had over 5000 residents, but its population now is closer to 400. It is still a productive area, being mined for gold, tin, silver, lead, zinc, copper and jade deposits. Known for its excessive temperatures, Marble Bar achieved a new heat record in 1923-24. Beginning on 31 October 1923, the town experienced a heatwave which continued for 160 consecutive days, where the maximum temperature was 37.8 degrees Celsius (100 degrees Fahrenheit) or higher. The last day of the heatwave was 7 April 1924.

Murder By A Lunatic