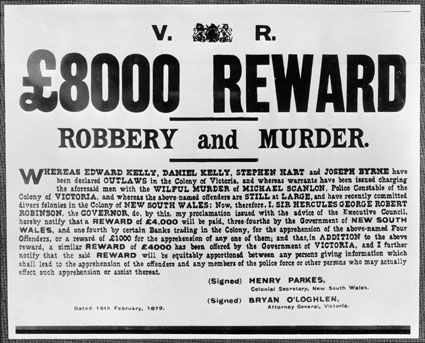 Proclamation by Governor George Bowen declaring Ned and Dan Kelly outlaws
In response to the public outrage at the murder of police officers, the reward was raised to £500 and, on 31 October 1878, the Victorian Parliament passed the Felons’ Apprehension Act, coming into effect on 1 November 1878, which outlawed the gang and made it possible for anyone to shoot them: There was no need for the outlaws to be arrested or for there to be a trial upon apprehension (the act was based on the 1865 act passed in New South Wales which declared Ben Hall and his gang outlaws). The act also penalized anyone who harbored, gave “any aid, shelter or sustenance” to the outlaws or withheld or gave false information about them to the authorities. Punishment was “imprisonment with or without hard labour for such period not exceeding fifteen years.” With this new act in place, on 4 November 1878, warrants were issued against the four members of the Kelly gang. The deadline for their voluntary surrender was set at 12 November 1878.