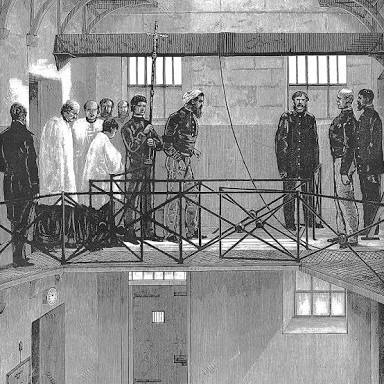 Ned Kelly, Australia’s most famous bushranger, was born in December 1854 in Victoria, Australia. Kelly was twelve when his father died, and he was subsequently required to leave school to take on the new position as head of the family. Shortly after this, the Kellys moved to Glenrowan. As a teenager, Ned became involved in petty crimes, regularly targetting the wealthy landowners. He gradually progressed to crimes of increasing seriousness and violence, including bank robbery and murder, soon becoming a hunted man. Many of Ned Kelly’s peers held him in high regard for his stand of usually only ambushing wealthy landowners, and helped to keep his whereabouts from the police, despite the high reward posted for his capture. However, he was betrayed to the police whilst holding dozens of people hostage in the Glenrowan Inn in June, 1880. Wearing their famous armour, the Kelly brothers held a shootout with police. Gang members Dan Kelly, Steve Hart and Joe Byrne were killed, and Ned was shot twenty-eight times in the legs, which were unprotected by the armour. He survived to stand trial, and was sentenced to death by hanging, by Judge Redmond Barry on 29 October 1880. Ned Kelly was hanged in Melbourne on 11 November 1880.