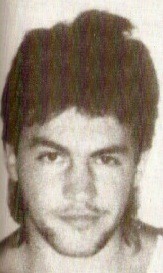 ‘Suspect warned’ before being shot Police Special Operations Group members had repeatedly told a police shooting suspect to drop his gun before hitting him with three shotgun blasts at close range, the Melbourne Coroner’s Court heard yesterday. Jedd Houghton, 23, died almost instantly during a raid on a caravan park in Bendigo on November 17,1988.  He had been an alleged member of a gang planning an armed robbery and there was a link be tween him and the killing of two constables in Walsh Street, South Yarra, Graeme Morrish, QC, assisting Coroner Hal Hallenstein, said. Mr Morrish said Houghton’s death was linked to that of Graeme Jensen on October 11, 1988, and a shooting the following day when Constables Steven Tynan and Damian Eyre were gunned down while checking an abandoned car.  Jensen, a close associate of Houghton, had been killed while armed robbery squad detectives were trying to arrest him at Narre Warren, the hearing was told. From the outset, due to his as sociation with Jensen, police had considered Houghton a suspect in the killings of the two constables in Walsh Street, Mr Morrish said. Houghton, Jensen, and two other men were believed to be planning an armed robbery, he said. Visual and electronic surveillance had been carried out by the Bureau of Criminal Intelligence of Houghton’s movements in the period leading up to the SOG raid, he said. It had been decided to arrest Houghton as a suspect in the Walsh Street killings. Four SOG members had entered the cabin where Houghton and his girlfriend, Kim Cameron, had been staying, at 12.08pm. Mr Morrish said two had gone for Houghton and the others had placed a hood over Ms Cameron’s head before whisking her away.  Houghton had pointed a gun at SOG member Sergeant Paul Carr and had been repeatedly told 10 drop the weapon, he said. Fearing one of them would be shot, Sergeant Carr and his partner had both fired their pump action shotguns, acting in self defence. The hearing, attended by Houghton’s mother, sister and Ms Cameron, viewed a nine-minute videotape which included graphic footage of the blood-soaked body and horrific wounds.  The cause of death was a shot gun blast fired at a distance of 10cm, hitting him in the chest.  Two other blasts fired from 10cm had hit Houghton in his upper body and arm. Three revolvers and a pistol had been found in the cabin. The hearing continues.