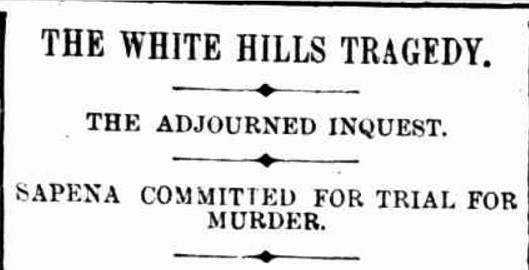 At Bendigo on the 17th November 1895, a Spaniard named Salvador Sapana, aged 27, informed Constable Green that he had murdered a compatriot named Francois Ferrandaz by breaking his skull with a sapling. Constables Reilly and Green proceeded to a small holding occupied by the two Spaniards, on which they raised vegetables, and found the dead body of Ferrandaz behind a bush some fifty yards from the hut. The whole of the left part of the head and face was broken in, as if the deceased had been struck repeated blows. The police found an iron bar eighteen inches long covered with blood, and this u believed to have been the weapon used. In a corner of a hut was a rough mattress saturated with blood, and the police believe that Ferrandaz was lying asleep on that mattress when the murder was committed.