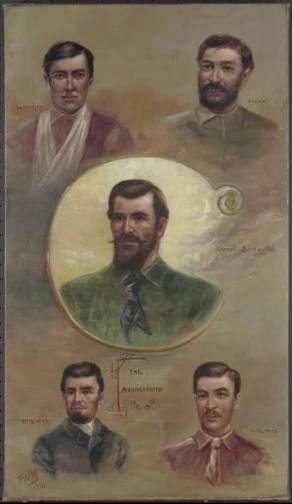 One of Australia’s youngest bushrangers, a fifteen-year-old member of Captain Moonlite’s gang, is shot and killed.

Augustus Wernicke was one of Australia’s youngest bushrangers, and part of Captain Moonlite’s gang. Captain Moonlite, aka Andrew George Scott, became a bushranger upon his release from gaol, eight years after robbing the bank at Mount Egerton, Victoria. He recruited several other gang members, among them 15-year-old Wernicke, and walked to New South Wales, hoping to find employment at Wantabadgery Station, well known for its hospitality. Being in the grip of a severe drought, and also having changed hands, Wantabadgery could offer them nothing. In desperation, Moonlite took 35 people hostage. In the resultant shootout with police on 18 November 1879, gang members James Nesbitt and Augustus Wernicke, together with Constable Bowen, were all shot dead. Moonlite and the surviving gang members were tried and charged with the murder of Constable Bowen. Moonlite himself was hanged on 20 January 1880 at Darlinghurst Court.