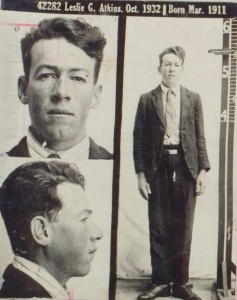 Richard L Jackson, and Leslie George Atkins, who escaped from the prison reformatory garden on the 3rd of December, were recaptured at Yackandandah on this day in 1937, by Constable W. Knowles, and were both given an extra 18 months’ imprisonment by the Beechworth honorary Justices. Jackson, under the name of Beattie, a former indeterminate sentence prisoner, was released on probation on the 24th of September 1934. He was convicted in December, 1934, for having broken into a garage, and returned to the reformatory. Atkins was convicted on the 1st of May 1934, for having set fire to a house and was sentenced to six months’ imprisonment. This was altered to an indeterminate sentence, and he was sent to French Island. He escaped, but was recaptured, and was sent back to Beechworth. Constable Knowles said that when he arrested the men he said, “Boys, the game is up.” One of them replied, ” I suppose so. Just our bad luck.” They did not offer any resistance. The Bench commended Knowles’s action and recommended that it be brought under the notice of the authorities.

A CHARGE OF MURDER