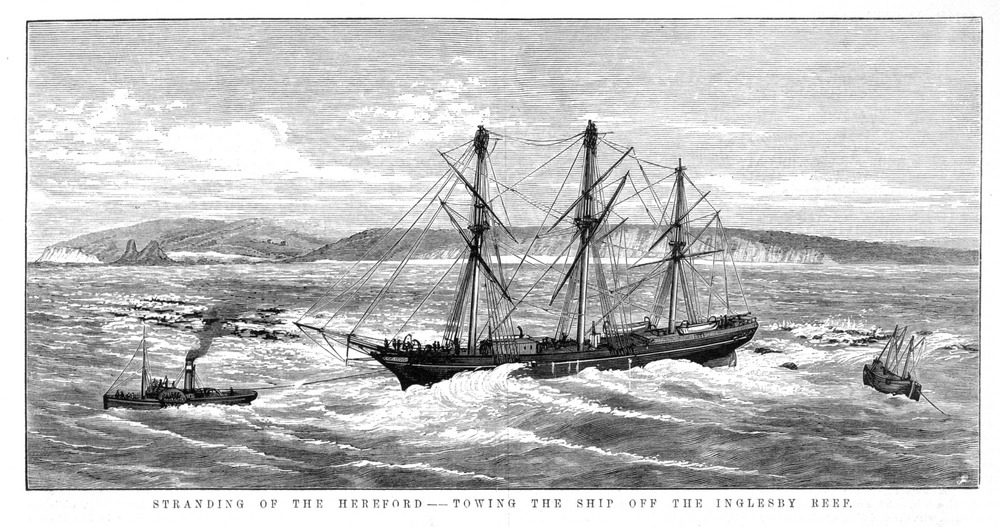 On January 11, 1881, the Hereford ran aground at Inglesby Reef near Port Phillip Heads, close to Point Lonsdale, Victoria, Australia.  The 1456 ton ship would remain stranded until she would be finally towed off the reef on March 12, 1881.

But her running aground would lead to the deaths of 2 men – Constable David Digby and Lumper Frank Wright.

On January 17, 1881, a police presence was requested aboard the wreck of the Hereford and Mounted Constable Purcell and Foot Constable Digby were transported out to the ship.  There were about 30 other persons on board looking after the safe removal of the cargo and those in charge of the ship.

Once the policemen were aboard the ship, the weather took a turn for the worst.  It was decided that the seas were too rough for the two constables to return to shore.  But overnight, the weather became tempestous! Waves were breaking over the ship and water was running into the cabins, the ship was bumping horribly against the reef.  All on board were fearful for their lives.  At 7.30am the following morning it was decided to launch the remaining boat in an attempt to find the boat that had come loose in the night and to return the policemen to the shore.

The two Constables, a crew of five and seven lumpers began the journey from the Hereford to shore.  Everything was going to plan until about 50 yards from shore the boat run onto a sandbank.  All the men were instructed to jump overboard but unfortunately a large wave capsized the boat.  Most of the men would manage to grab the upturned boat to avoid being swept out to sea by the receding wave, but Constable David Digby and Frank Wright were not so lucky.  Constable Purcell was brought to shore with great difficulty.

A search was undertaken for the missing men but was called off around 11am with no sign of the two men.  Their bodies were not recovered.

Constable David Digby was aged 50 years and left behind a wife and a large family to mourn his loss.

Constable Digby is listed on the Police Honor Roll for those who lost their lives while doing their duty.

Caught by a Baker 1903
Scroll to top Book online now!