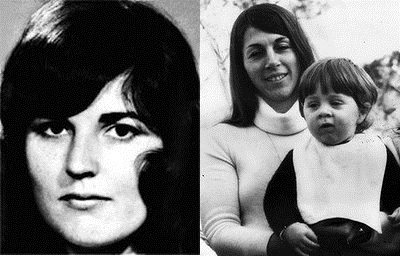 On the 13th January, 1977, neighbours to 147 Easey Street, Collingwood entered the open backdoor of the house, seeking the two young women who lived there that had not been seen since the 10th January.  On entering the kitchen, they found a note that had been left by the boyfriend of one of the women.  The neighbour then entered the hallway and saw Susan Bartlett’s body lying at the end of the hallway.  Calling out to her friend to not come any further into the house and asking them to call the police, she entered the hallway to check if Susan was alive.  She would see the half-naked body of Suzanne Armstrong on the floor of her bedroom, again obviously dead.  She then called out to Gregory, Suzanne’s 16 month old son who began to cry in his cot in his room.  The neighbour bundled him up and took him back to their house to await the arrival of police.

Susan Bartlett was a 28 year old teacher who had been teaching at Collingwood High School at the time of her death.  Her friend and roommate, Suzanne Armstrong was 27 years old and not working, looking after her young son.  The pair had been friends for a long time, even travelling overseas together about 4 years earlier.  It was while overseas in Greece that Suzanne became pregnant and eventually gave birth to her son.  The two women had been living in Easey Street since October 1976.  The last time they had been seen alive was the on the evening of January 10th, when Susan’s brother and his girlfriend visited.  The four made plans for dinner the following week.

Throughout the day on the 11th January, Suzanne’s boyfriend made numerous attempts to ring her but to no avail.  On the 12th January, he tried again to ring but again no answer.  He then drove to Easey Street and left a note on the kitchen table for Suzanne to ring him.  He noticed that the lights were on and that the kitchen door was open but didn’t venture any further into the house.  He believed that the girls weren’t far away.  When he rang again on the morning of the 13th January, Detectives answered the phone.

The neighbours had also attempted to contact the two Sue’s over the past couple of days as they had found the girl’s puppy roaming in the street.  They had left a note to the girls on the front door to the effect that they had the puppy at their place.  But as this went unanswered, the two neighbours entered the house on the 13th and discovered the bodies.

The inquests into the two girl’s murders were held on the 12th July 1977 in the Coroner’s Court.  The official verdict was that “multiple stab wounds then and there feloniously unlawfully and maliciously inflicted by a person or persons unknown and that such person did murder the said deceased.”  Police surmised that the murderer entered the premises through Susan’s bedroom where the blind had been dislodged and there was dirt on the end of the bed.  Blood stains were found in the bathroom and a bloodstained towel was found on the couch in the lounge room.  There were smears of blood down the passage wall to where Susan’s body was found.  Suzanne’s body was found on the floor of her bedroom with a pool of blood under her and another about 60cm above her head.  She was naked from the waist down but her panties and shorts were found beside the bed.  Medical examination of the Suzanne showed a total of 29 stab wounds while Susan had 55 stab wounds.

Interestingly, the knife believed to have been used was discovered on a ramp leading to the Victoria Park Railway Station.  On the 14th January, investigations of the manhole and drains in the area discovered a blood stained facewasher and shawl two blocks from the Easey Street address.

DNA testing has been undertaken on many of the 130 original persons of interest, although 41 of those were now deceased (January 2017).  In January 2017, a one million dollar reward was offered

Constable Digby and the Wreck of the Hereford 1881
Scroll to top Book online now!