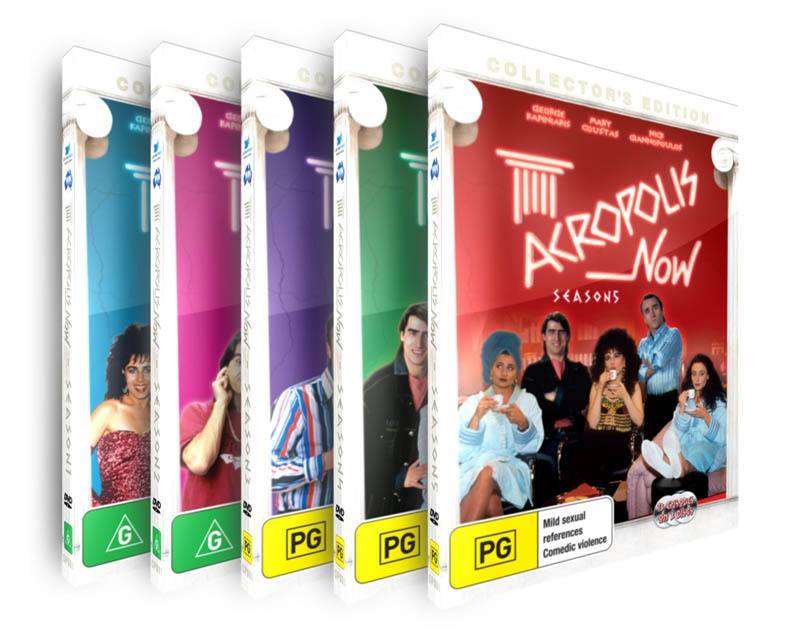 The title of the show being a play on the film Apocalypse Now. Its brand of cross-cultural humour still resonates today in such shows as Pizza and Here Come The Habibs.

The show was produced by Crawford Productions and ran for 63 episodes from 1989 to 1992, airing on the Seven Network. It was created by Nick Giannopoulos, George Kapiniaris and Simon Palomares, who also starred in the series. They were already quite well known for their comedy stage show, Wogs out of Work.

Each episode was 20 minutes in length and was filmed in front of a live audience. Although the Acropolis cafè/hotel was filmed at HSV-7 Studios the exterior is still standing and looks almost identical to the show, being located at 251 Brunswick Street, and corner of Greeves St, Fitzroy, Melbourne, Victoria Australia.

The premise of the show is based around Jim’s father Kostas “Con” Stefanidis (Warren Mitchell) asking Jim to run the family business, the Acropolis café, when he suddenly leaves Australia to return to his homeland of Greece. The series centres on the activities of the cafe staff. Greek Jim Stefanidis (Giannopoulos), is the immature owner and his best friend, Spaniard Ricky Martinez (Palomares) is the sensible manager (seasons 1-2 only). Memo (Kapiniaris) is the traditional Greek waiter, while Liz is the liberated Australian waitress. Skip is the naïve new cook from the bush and Manolis is the stubborn cook from the old cafe. ‘Hilarity’ prevails from the clash of cultures and beliefs. Jim’s hairdresser cousin Effie, played by Mary Coustas, became a hugely popular and enduring character during the run of the show. Coustas later reprised the role for several TV specials and series including Effie, Just Quietly, an SBS comedy/interview show, and Greeks on the Roof, a short-lived Greek Australian version of the British talk Show The Kumars at No. 42.

Although the show itself did not win any awards, Mary Coustas won the 1993 Logie for Most Popular Comedy Performer for her role as Effie. With the ethnic popularity of the show, Acropolis Now helped popularise the term “skippy” or “skip” to refer to Anglo Celtic Australians and others of European but non-Mediterranean descent. This term (inspired by the iconic 60’s TV series Skippy The Bush Kangaroo) became popular with Mediterranean-Australians, and to a lesser extent non-Mediterranean people, especially in Melbourne.

Sinking of the Nestor
Scroll to top Book online now!