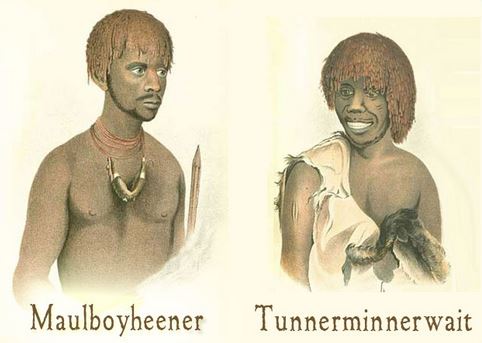 The very first execution in the then Port Phillip district was of two aboriginal men Tunnerminnerwait and Maulboyheenner, colloquially known as Bob and Jack.

Bob and Jack were part of a group that had been brought over to the mainland by the Protector of the Aborigines, George Robinson.  It was believed that they would be able to help with communications between the local indigenous community and the white settlers.

However after living here for a time and due to the lack of rations for them, Bob and Jack and a number of other aboriginals commenced raids on local settlers and during one of these, two whalers would be murdered near Cape Patterson.  A group led by Captain Powlett and accompanied by nine police, nine members of the 28th Regiment and three blacktrackers would seek out the proposed perpertrators.  Bob and Jack and three aboriginal women were arrested and brought back to Melbourne for trial before Judge John Walpole Willis.

Redmond Barry would be appointed counsel for the indigenous men and questioned the evidence that was mostly circumstantial, and of the witnesses or were unable to identify the accused.  Robinson would testify that all 5 were of good character. Barry questioned the legalities of trying the two aboriginal men and if they understood what the proceedings were.  He also put forward a motion that half of the jury should be made up of those who could speak the language of the defendants.  This was denied.  Judge Willis recommended mercy given the good character of the group prior to these events.  Despite this the two men would be found guilty and sentenced to death while the three women, one of whom was Truganini, would be acquitted.

Preparations would begin for the gallows on the north west side of the New Melbourne Gaol being built on Russell street.  The gallows were quite simple in construction, two upright poles about 20 feet in height with a cross beam to which the ropes were fastened.  A platform was constructed about 6 feet below that on which the prisoners would stand, this was hinged on one end and would drop at the time of execution.

Bob and Jack were brought from the watch house in the Government block in Bourke street to the execution site.  They were dressed completely in white as was customary at the time.  A calico screen had been erected in the wagon to hide the men from the public gaze until they arrived at the gallows.  Nearly the entire population of Melbourne had turned out to witness this first execution and would take up every vantage point from trees to even standing on the coffins waiting to receive the executed men!

A path was cleared by bayonet point to the gallows but they could only accessed by ladders.  Bob and Jack had already had their arms pinioned behind them and were forced to climb the ladder using their chins.  Eventually they reached the platform and the necessary arrangements were made by the hangman.  Once this was done, the platform was released only to be caught up, leaving the two men choking.  Eventually the platform was dislodged sending the men to their deaths.

Once the bodies had hung for an hour, they were cut down and placed in coffins before being buried in the Aboriginal section of the Melbourne Cemetery that now lies beneath the Queen Victoria Market.