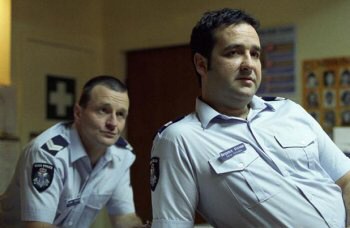 Bad Eggs is an Australian comedy movie, written and directed by Tony Martin and Producted by Macquarie Film Corporation with a budget of A$4.5 million. The film was released on the 25th of July 2003.

Ben Kinnear (Mick Molloy) and (Bob Franklin) Mike Paddock are detectives with the Melbourne Police force’s elite Zero Tolerance Unit. When a freak accident involving a dead magistrate  named Poulgrain lands them on the front page of the local paper, Ben and Mike are busted and demoted down to uniformed duties. Things get worse when they pay a visit to the Magistrate’s widow Eleanor (Robyn Nevin) and accidentally burn her house down. Thinkings become more complicated when Julie Bale (Judith Lucy), a journalist and a former police-officer and onetime partner of Kinnear’s, is arrested on a charge of blackmailing the Magistrate. But when Ben discovers a strange link between the accident and the business affairs of a shady casino boss he and Mike have been investigating, the pair decide they can no longer turn a blind eye to the corruption rife amongst their own colleagues.

Interesting filming fact about Bad Eggs, Peter Aanensen is playing “Arthur Ferris”, the same character he played in the classic Aussie police television drama Bluey (1976). Ferris, who was Bluey Hills’ superior in the third series, is in this film seen working as a security guard at Victoria’s Parliament House.