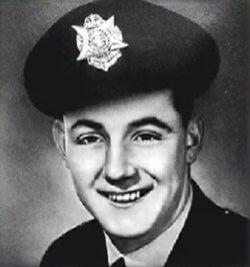 He had been assigned to investigate and prevent numerous thefts from cars which had recently occurred in the vicinity. At about 10.35 pm, Constable Howell intercepted a man interfering with a Morris Minor. According to witnesses, after a struggle the Constable ran after the offender to the far side of a viaduct. The Constable was then shot in the stomach at point blank range with a sawn-off .22 calibre rifle. Although unarmed and mortally wounded, Constable Howell continued to chase the offender. He collapsed in the centre of Normanby Road, and the offender escaped. Although in shock and terrible pain as well as lapsing in and out of consciousness, he was able to give a description of his assailant to citizens who assisted him and to other police who arrived shortly after. Crucially to the later trial, he identified a hat and other items as belonging to the offender.

Rushed to the Alfred Hospital for emergency surgery, Constable George Howell died in the early hours of 1st February, 1952 at just 26 years of age. Even at the hospital he attempted to look at a line-up of men and identify his attacker. A skilful investigation primarily based on articles found at the crime scene and information from Constable Howell, led to the arrest and subsequent conviction of a well known and active criminal, William O’Meally aged 28 years.

Constable George Howell was appointed to the Victorian Police Force in May, 1948. He served at Russell Street, Malvern and since 1949, was stationed at East Malvern.

The funeral was attended by over 400 people and was held at the Ewing Memorial Church in Malvern before Constable Howell was buried in the Cheltenham cemetery.

The perpertrator of this crime William O’Meally was eventually sentenced to death of the murder of Constable Howell, however this would be commuted to life imprisonment without parole.