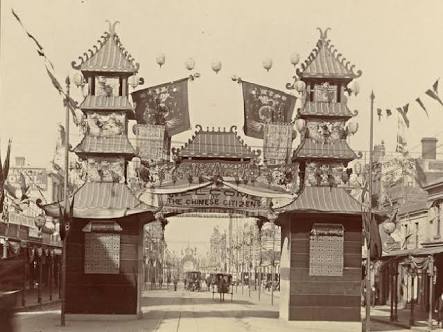 Melbourne’s ‘Chinatown’ has been subjected to an Intense search by many detectives and police since the murder last night of Yung Shlng, 53 year old bosun of the freighter Fort Abltiba.

Shlng was shot dead In a taxi at point blank range. The owner-driver of the taxi, Robert Sydney Pack, was shot in the abdomen and the leg and was admitted to hospital in a critical condition. Pack told detectives that both he and Shlng were shot when they refused an order by two other men to hand over their money, but detectives are puzzled by the fact that the killers did not touch £156 in Shing’s pocket, and also left behind £10, which police found in the seat of the taxi.

The killing was discovered when detectives Investigated a taxi parked in the middle of the road with the motor still running. They found Shlng dead in the front seat and Pack lying wounded in the back seat. Pack told the police that while driving the four men to the docks one pressed a revolver against his’ ribs and ordered him to get into the back seat. He said one of the others joined the gunman and shots were fired. Police believe that the shooting is a prelude to gang warfare, involving customers of a Chinese gambling den.

Inquiries have disclosed that Yung Shlng had won between £5000 and £8000 In gambling over the past two months.