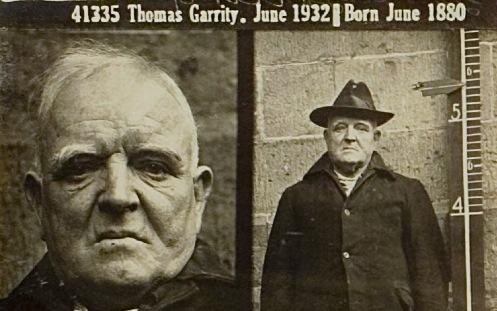 The mystery of a woman’s body, found in a cupboard at Thomas Garrity’s fish shop, in Bay-street, Port Melbourne, on this day in 1931, was related to the jury and Mr. Justice MaeFarlane, in the Criminal Court, when Garrity was charged with having murdered. Mrs. Rose Harvey, 51. The Crown Prosecutor said Mrs. Harvey died from severe head injuries, inflicted by a hard instrument or a kick. On the day before the murder, she had several drinks with Garrity in a city hotel, and later they went to Garrity’s shop. At midnight a man heard the voices of a man and woman in the shop, and half an hour later a constable was passing the shop when he saw shadows on the glass partition. The shadow were of a man and woman struggling. The man had hold of the woman’s throat, and he saw her tear the man’s hands away. Some hours later Garrity asked taxi-driver to dispose of a body for him. He said he had found the body dumped on his premises after two men and a woman had left his shop. The taxi-driver took Garrity to the police station, and Garrity told the police. that lie was drugged by people, who were in his shop, and found the body when he woke up. The Crown Prosecutor said the evidence pointed to Garrity striking Mrs. Harvey dragging her body upstairs, bringing it down again, placing it the washhouse, and then in the cupboard. Cross-examined. Dr. Hart, who, was called by the police to examine the body before it was moved from the cupboard, said it would have been very difficult for one man to have placed the body in the position in which it was found. The hearing was adjourned.