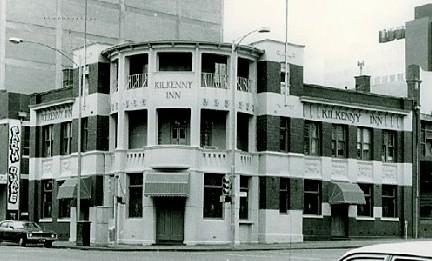 Because he could not listen to aspersions being cast upon the green of old Ireland on the day of St. Patrick’s procession, Patrick William Brennan, 45 years of age, a shearer, formerly of Terang, broke into the conversation, at the Kilkenny Inn, Lonsdale street, of a group of youths, who were chaffing one another about the green they were all wearing. One of them pushed him away, and he walked to the doorway and fell dead. Yesterday the coroner (Dr. R. H. Cole) held an inquiry at the Morgue. Sub-inspector H. Harris appeared for the police, and Mr. W.S. Doria appeared for Harold McDougall, 21 years of age, of Lonsdale street, wharf labourer, who had been arrested on a charge of murder.

Evidence was given by a number of persons in the hotel that MeDougall and some companions were joking among themselves. They all had green in their coats, and McDougall said that the green was no good. Brennan came up and told him not to say that again, and McDougall told him to go away. Brennan then called him a name, and McDougall gave him what was described as something between a push or blow on the front of the body. Brennan walked through the parlour to the door, where he appeared to trip on the mat and fall with his head on the step. He was dead when the ambu lance arrived.

Dr. .lohn Brett, of Collins street, who made the post-mortem examination, said that there were superficial bruises on Brennan’s forehead. The heart was greatly dilated, and there was a quantity of vomited matter in the throat, air passages, and lungs. Death was due to suffocation and shock. The matter in the bronchial tubes was not sufficient to cause suffocation without the dilation of the heart. A blow or push on the distended stomach might cause the conditions, or a fall on the stomach against the step.

Harold McDougall said that when Brennan interfered he told him to go away. Brennan then called him a name, and he pushed him away, placing his hand on his chest. It was three or four minutes before Brennan walked out. There was no quarrel between them.

The Coroner.-There is no doubt that an assault took place, whether a blow or a push, and that that blow would account for the vomiting and heart failure.

Mr. Doria.-I submit that the conditions were brought about by his fall.

The Coroner.-When a man assaults another he must take the consequences. I find McDougall guilty of manslaughter, and he will be committed for trial at the general sessions on April 12.

The coroner found that Brennan died from the effects of an unlawful assault committed upon him by McDougall. McDougall was committed for trial, bail being fixed at £50.

One Dead, Many Injured in Victorian Rail Crash