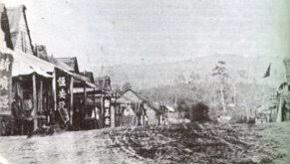 One of the most shocking murders which has ever been seen in Beechworth occurred at Chinaman’s Flat. Luke Lyons and Patrick Saxton arrived in the Colony together and were believed to be sharing a claim. The murderer and his victim were mates and up until the time of the fatal occurrence lived next to each other on terms of great friendship. On the evening of the murder the men were drinking together, in the company of Patrick’s family. After two bottles of brandy were drunk, the conversation turned to arranging a marriage alliance between Luke and Patrick’s sister. After all the brandy was finished, Luke left the tent for the purpose of procuring more brandy. Instead of going for the liquor as he intended he loitered outside the tent, and heard himself spoken of by the Saxton’s in terms of disparagement. Rushing into the tent, Luke started a violent rant before leaving the tent. Patrick followed and the fight began. The argument was taken into Luke’s tent and whilst in the tent Patrick was stabbed by Luke. When they both struggled out together, it was discovered that a wound from a knife, or another sharp instrument, had been inflicted, and that Patrick’s entrails were protruding some inches from his stomach. A blow was also made at Patrick’s brother with a knife by Luke, but he was only slightly hurt. Patrick died in front of his tent. Luke, having run off in the bush, was apprehended about an hour afterwards by Detective Alexander. An inquest was held on the body of Patrick Saxton, and after hearing the evidence, the Jury was divided in opinion but a majority concurred in the verdict of wilful murder, and the prisoner was committed for trial. On July the 21st, Luke Lyons was found guilty of manslaughter and was sentenced to three years hard labour on the roads.