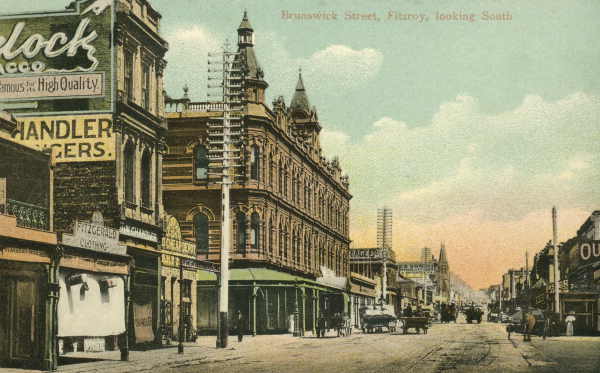 A lamentable catastrophe occurred in Collingwood on Saturday evening last, a man named Currie having first shot his wife, and afterwards attempted to commit suicide. The case appears to have been one arising from jealousy on the one side, and passion and drink upon the other. So far as at present known, the particulars may be briefly stated as follows — A man named George Currie, well known throughout the district from being the Inspector of Nuisances for the Fitzroy Municipality, has been living for some time in Moor street, Fitzroy, and latterly on very bad terms with his wife. Currie was a member of the local volunteer company, and formerly a sergeant in the police force. He was also an old soldier, having been engaged in the Caffre wars. His disputes with his wife arose partly from their being of different religions, and partly from her suspecting that he was keeping a mistress in the neighbourhood. During the last few weeks, Currie has taken to drink, and his quarrels with his wife became so violent that their friends endeavoured to effect a separation. Last Wednesday, matters appeared to reach a climax, as Currie then attempted his wife’s life with a loaded horse pistol, but she fortunately escaped from him. He was given into custody, and brought up the following morning, at the Fitzroy Police Court. The charge, however, was withdrawn, arrangements being made that Currie should allow his wife a separate maintenance, and go out of town until the necessary details were completed. Accordingly he went down to St. Kilda or Brighton, but returned the next day begging to be received home again. The wife consented, and to further pacify her, Currie purchased a silk dress; for which he paid seven guineas, and also gave her two gold rings, and a diamond ring. After this, Currie again became somewhat violent, and demanded money from the woman, a request which she refused to comply with Saturday, however, appealed likely to pass over quietly, although it is a fact, not without significance, that in the morning Currie made his will. During the day he was told off as one of the firing party to attend at the funeral of the volunteer who was buried on Saturday. Accordingly, about half past nine o’clock at night, after his return, he commenced to clean his rifle. There was nobody in the house at the time besides himself, his son, a lad of 13, and his wife. The lad was going to bed and his mother was passing into the bedroom, when suddenly, without speaking, Carrie, who mast previously have loaded his rifle, discharged it at her. The woman’s back was turned to him at the time, and the ball passed right through her body. She fell down, but recovering scrambled onto the bed.  Currie without displaying any alarm, picked her up in his arms, carried her out of the front door into the garden, and told his son to run for a doctor. Some men who were passing by took the woman, who was quite insensible, into the house again, and Dr Tracy, who was speedily in attendance, pronounced her case to be hopeless. Currie was of course taken into custody. He had been sitting in a chair, displaying the utmost indifference, though the room was swimming with his victim’s blood, and he freely acknowledged all the particulars of his crime. Shortly after he had been removed to the police station the son showed Dr Tracy a bottle, the contents of which he had seen his father swallow when leaving. This it was ascertained had contained laudanum, so that Currie, who had begun to show the effects of the poison, was conveyed to the Melbourne Hospital. The stomach pump was immediately applied, but it was not till, six o’clock that the surgeons were enabled to pronounce him out of danger and of course he is at present in a most exhausted condition. The unfortunate woman, his wife, became sensible during the night and her depositions were taken. They were simply that her husband had shot her without any provocation. She lingered in great pain until about 7 o’clock in the morning when she expired. Dr Tracy and Dr Featherstone made a post-mortem examination of the body. The district coroner held an inquest on it on Monday morning, and a verdict of wilful murder was returned.