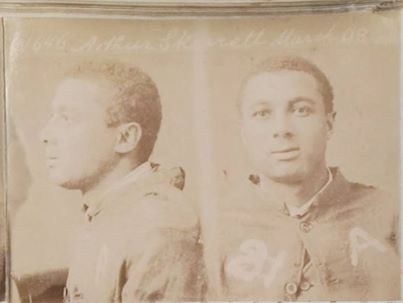 Following the inquest to-day concerning the death of John Alfred Taylor, a grocer, of Fitzroy, on June 6, Arthur Skeritt (48), a coloured man, was committed for trial on a charge of murder. Taylor, who was between 60 aud 65 years of age, kept a small shop at the corner of Fitzroy and Argyle streets, Fitzroy. He was found battered to death in his shop early in the morning of June 7. The police produced several surprise witnesses, who said that on the night of Taylor’s death Skeritt was in possession of a sovereign, bank notes, a quantity of coppers, cigarettes, cigarette papers and other goods similar to those stocked by Taylor. Skeritt was quite at his ease during the inquest, and when the Coroner (Mr. D. Grant) announced his finding Skeritt produced some tobacco and rolled himself a cigarette