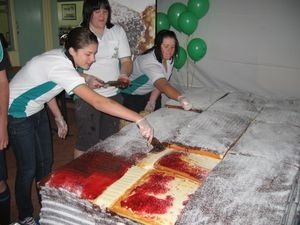 On June 11, 2011, Toowoomba broke the Guinness World Record for the world’s largest lamington at the Newtown Rugby League Club. The record-beater weighed 2361 kilograms, equivalent to 45000 normal lamingtons, and eclipsed the previous record held by Ipswich. Both cities claim to be the birthplace of this Australian classic and Toowoomba is contemplating erecting a “big lamington” as a tourist attraction.