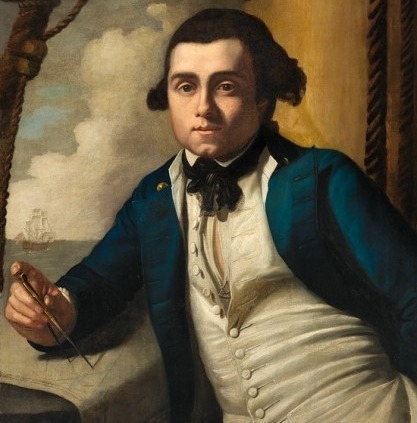 William Bligh was born in Plymouth, south-west England, on 9 September 1754. He was only 8 when he first went to sea. At age 22, he was chosen to join Captain Cook’s crew on the ‘Resolution’, and became commander of the ‘HMAV Bounty’ eleven years later. The famous mutiny on the Bountry occurred after Bligh left Tahiti on his way to the Caribbean. For reasons undetermined by historical records, Master’s Mate Fletcher Christian led the mutiny, with the support of a small number of the ship’s crew. Theories have abounded, foremost among them being Bligh’s stern discipline and tendency to push his crew very hard. Bligh and his own supporters were provided with a 7m launch, a sextant and enough provisions to enable them to reach the closest ports, but no means of navigation. Bligh chose not to head for the closer Spanish ports, which would have slowed down the process of bringing the mutineers to justice, but instead completed a 41 day journey to Timor. From here, he stood a better chance of communicating quickly to British vessels which could pursue the mutineers. After navigating some 5,600km from memory of Cook’s charts and voyages, Bligh and his surviving crew arrived at Timor on 14 June 1789. After recovering in Timor and being tended to by the inhabitants of the Dutch colony, Captain Bligh finally returned to England, arriving there on 14 March 1790. His men had suffered starvation, scurvy and dehydration. Whilst some of the died from the ravages of the journey, many of them survived to serve in the Royal Navy once more.

WOMAN WANTED TO GO TO GAOL