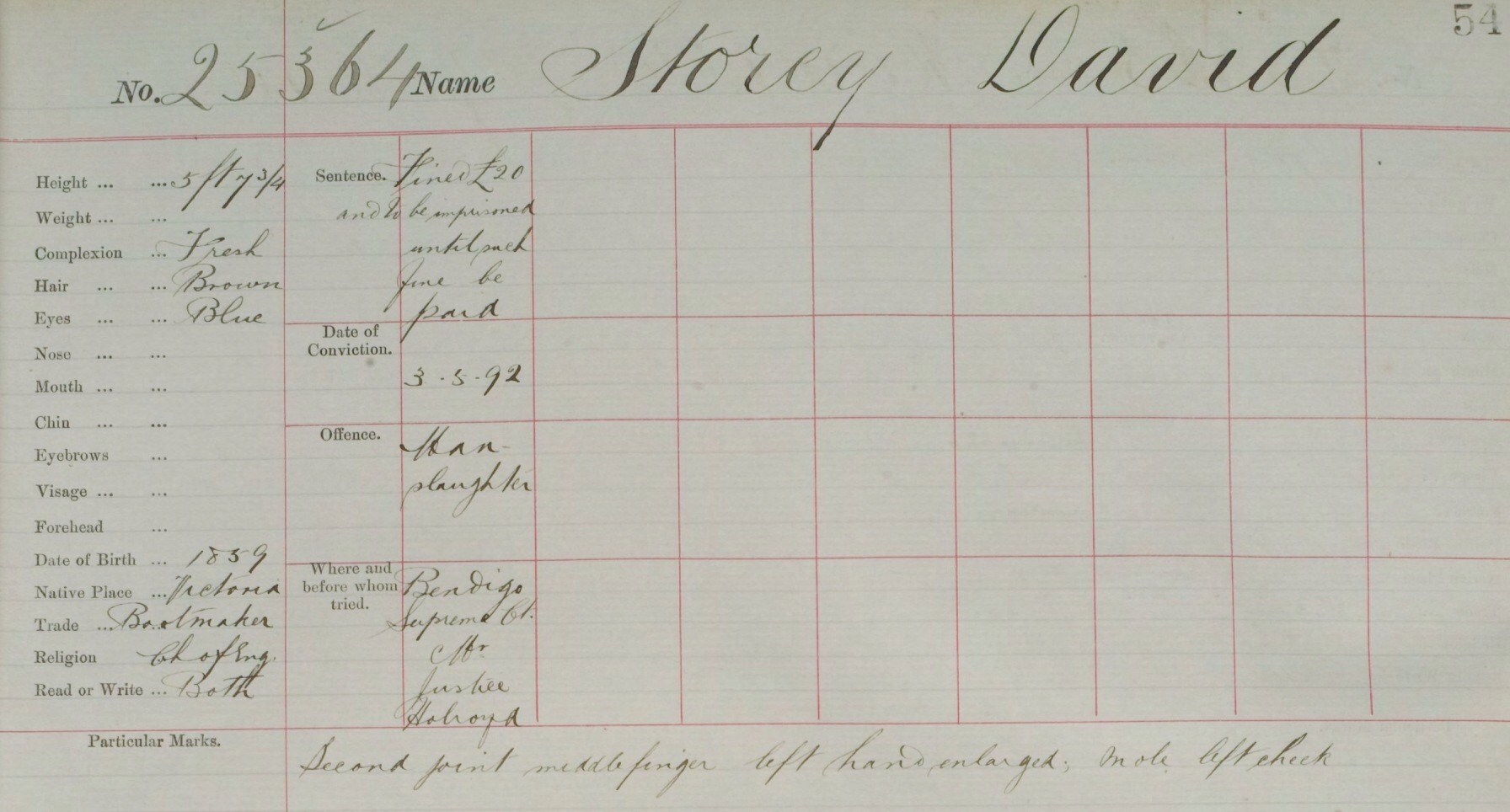 The position in which a man named David Storey found himself recently at Bendigo should be a warning to all men who, with hasty temperaments and temporary under the influence of liquor, give vent to passion and action. Storey was in company with a Constable named Brown, who was in private clothes, and several others, and had been drinking, so much so, apparently, that they were in that condition described by the poet, “When the wine is in ths wit is out,” A dispute arose about the payment of some drinks. Brown, it is asserted, used some forcible language towards Storey, who, after a brief interval, retaliated by striking Brown in the mouth. The blow, coupled with undoubtedly an unsteady gait, caused Brown to fall, and in doing so his head came in contact with a sharp stone. This caused concussion of the brain, from which the unfortunate man died. The whole occurrence passed very rapidly, and doubtless Storey was as much amazed as anyone to find what was at first a trivial affair, having such a tragic termination. Storey was duly committed for trial on a charge of manslaughter, and at the ‘Criminal Sessions in Bendigo the other day, before Mr Justice Holroyd, found guilty, the jury adding a strong recommendation to mercy. Mr Justice Holroyd, in delivering addressed a few remarks to Storey, and
remarked that he hoped the occurrence would be a warning to him for life not to go into any street brawls again. Storey, was then sentenced to pay a fine of £20. The sentence may seem light, and if every street brawler imagined he wae going to get off with a fine for any serious termination of a disturbance through deeming the sentence in question a precedent, it might be regretted that the judge did not impose a heavier penalty, Judge Holroyd, however, was humane enough to think of keeping Storey from contact with ordinary criminals. The whole surroundings of the case olearly showed that it was altogether a chance circumstance that led to the tragical termination of very trivial quarrel, and the evidence brought forward showed that Storey had held positions of trust in connection with two business firms for very long periods, was usually of an inoffensive nature, and was not hitherto known officially to the police. Under all those circumstances, the imposition of the fine is to be regarded as a proper vindication of justice. It cannot be regarded as a certainty, how ever, that quarrelsome people who get drunk and aggressive in action and bring themselves into a similar position will get off either with a fine, or as lightly. On the other hand, it ought to be a warning to people that cannot control their tempers under the influence of liquor, that no brawl is unattended with more or less serious consequences, from manslaughter to murder, and therefore the whole case should carry its moral with it.