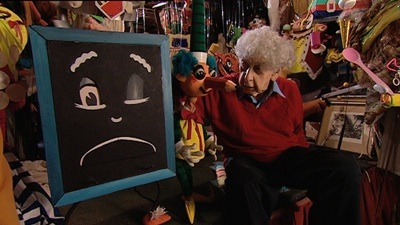 “Mr Squiggle and Friends” was a long-running children’s television series on Australia’s ABC. It featured a marionette with a large pencil for its nose. Mr Squiggle regularly flew to Earth from his residence at 93 Crater Crescent, The Moon on his spaceship named Rocket. In each episode, Mr Squiggle would create imaginative and creative drawings from squiggles sent in to the programme by children from across Australia, accompanied by their letters. The concept of Mr Squiggle was created by puppeteer, cartoonist and illustrator Norman Hetherington. Mr Squiggle first appeared on the Children’s TV Club on ABC TV, but developed into a regular series of short, five minute slots, with occasional longer special programmes. Hetherington manipulated the marionette from overhead: drawings were usually completed upside-down, so would remain largely unrecognisable until Mr Squiggle called out “Upside down! Upside down!” and the sketch was turned around. Scripts were largely written by Hetherington’s wife Margaret. A female helper assisted Mr Squiggle each time, variously Miss Gina, Miss Pat, Miss Jane, Roxanne and Rebecca. Other characters included the grouchy Blackboard; Bill the Steam Shovel; and Gus the Snail, who sported a TV for a shell, then a flower pot. The first Mr Squiggle episode appeared on the 1st of July 1959, and the show continued to run for forty years. The final episode, which was produced in 1996, was aired on the 9th of July 1999.

Murder of the Crawford Family