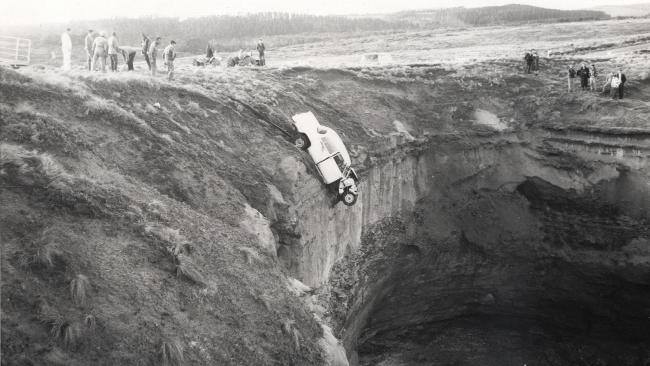 IT takes a truly monstrous man to attach alligator clips to the ears of his sleeping wife and children then zap them with electricity.  The sort of cruel coward who would also use a hammer to belt his six-year-old daughter in the head. Elmer Kyle Crawford is just such a man, a coroner found. He acted not in a fit of rage, but after weeks of planning the ghastly murders of his pregnant wife and three children. Crawford electrocuted and bashed his family to death at their home in Cardinal Rd, Glenroy, on July 1, 1970. And he got away with it – so far.

Running through what is known of the killings, it is easy to see why Victorians were appalled. Although not qualified as an electrician, Crawford worked in that capacity for the Victoria Racing Club at Flemington racecourse for 14 years. Workmates told police there was no indication he was capable of such an atrocity. No trouble at home that they knew of. But something troubled Crawford enough to painstakingly plan what he hoped would be the perfect crime — one that would leave him looking like the deserted husband whose wife ran away with the kids. The evidence points to Crawford planning to report his wife and children had gone missing. The new wills he and his wife drafted two weeks earlier would have left him very comfortably off. He was forced to rapidly change plans and disappear after a quirk of fate meant the bodies didn’t sink in the ocean without trace as planned. Crawford was busy cleaning up the blood in the family home when he found out the car he had earlier pushed off a cliff hadn’t disappeared into the Blowhole at Loch Ard Gorge near Port Campbell. Indeed it had been found teetering on a ledge just above the churning sea. He abandoned plans to destroy all incriminating evidence and simply disappeared .

Police have been unable to establish why Crawford murdered his wife Therese, 35, and children Kathryn, 13, James, 8 and Karen, 6. One possibility is the couple argued over whether or not to terminate Therese’s fourth pregnancy. That theory is based on an unfinished letter from Mrs Crawford to her family in which she indicated she wasn’t happy about being pregnant again. “I have been so upset, but what’s the use, I am two and a half months now,” she wrote. “So looks like I have had it this time. “We were going to come up home this Christmas but won’t be able to now as I’ll be due the end of January.” Police found the letter along with a newspaper article about abortion written by prominent Right to Life campaigner Margaret Tighe. They also discovered items Crawford had stolen from the VRC and evidence he had been selling stolen goods for years. That led to another theory, that Mrs Crawford may have found out her husband was a thief and threatened to expose him.

Evidence left by Crawford paints a chilling picture of how he killed his family. He made a bizarre electrocution device consisting of a 15m length of electrical cord with a plug at one end and an extension cord socket on the other. Running from the main cord were five smaller leads, each with alligator clips on the end. Crawford waited until his wife and children were asleep before murdering them. He used his electrocution device on his wife, eldest daughter Kathryn and James. Crawford also bashed Kathryn and James in the head, almost certainly with a hammer, fracturing their skulls. Little Karen was spared electrocution, but she was beaten to death with the hammer. Crawford had earlier removed the back seat of his 1956 Holden sedan so he could stack the four pyjama-clad bodies inside. He wrapped each body in a blanket and then put a tarpaulin over them. He then drove hundreds of kilometres to Loch Ard Gorge. But a drainage ditch just before the edge of the cliff stopped him from pushing the car over the edge. Undeterred, he spent an estimated two hours building a bridge of rocks so he could roll the car down the slight slope, across his makeshift bridge and over the cliff. His intention was that it would plunge into the Blowhole and never be seen again. As an extra precaution, in case the car and the bodies were later found, he attached a hose to the exhaust and jammed it through the driver’s side window to make it look as though Mrs Crawford had committed suicide after beating her children to death. That’s probably why she was the only one electrocuted and not bashed. As he pushed the car over the cliff, Crawford would not have seen the rocky ledge 16m below. Thinking his grisly task complete, Crawford made his way back home. Police don’t know how he returned to Glenroy, but it is possible he hitchhiked or rode a small motor scooter he carried to Port Campbell in the boot with the bodies. They believe he murdered his family and tried to dispose of the bodies sometime between sunset on July 1 and the early hours of July 2.

Sightseers first noticed the car perched precariously on the ledge at the Blowhole at 1.30pm on July 2. Crawford was seen in the driveway of his home at 5.50pm that day. Broadmeadows police officer John McCarty was sent to the Crawford home at 6.20pm after a registration number check revealed the car was owned by Crawford. It had not yet been possible to search the car because it was a dangerous process requiring cliff rescue experts. Evidence suggests Crawford was inside the house cleaning up blood when Constable McCarty knocked on the door. The knock went unanswered and, because it was just a routine inquiry at that stage, Constable McCarty went back to the station. Police presume it was at this point Crawford abandoned his plan to pretend his wife and children had left him and fled himself. Constable McCarty went back to the house at 10pm after receiving information from Port Campbell there was a rifle in the car and blood on the seats. He and another officer broke in when no-one answered the door. They discovered blood-stained sheets and mattresses. The homicide squad was called in and arrangements made to search the car at first light the next day.

Editors note – This article on the Crawford murders is explored in more detail in the excellent book “Almost Perfect” by Greg Fogarty.