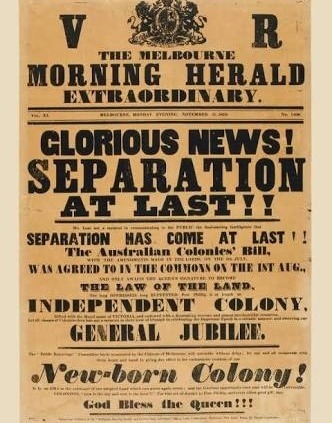 When James Cook became the first European to sight and map the eastern coastline of Australia, he claimed the eastern half of the continent for England under the name of New South Wales. After the arrival of the First Fleet, England sought to secure its claim on New South Wales be establishing further settlements south, and eventually north and west. In 1803, the British Government instructed Lieutenant-Governor David Collins to establish a settlement on the southern coast. This settlement was not a success and the site was abandoned, but expeditions continued to be mounted to explore the land between Sydney and Port Phillip. Thanks to the initiative of John Batman, Melbourne was settled in 1835, and despite being regarded as an “illegal” settlement, the foundling colony thrived. Governor Bourke formally named Melbourne in 1837. The Port Phillip Colony encompassed Melbourne and “Australia Felix”, which was the fertile western district discovered by Major Thomas Mitchell. The first petition for formal separation of the colony from New South Wales was presented to Governor Gipps in 1840, but rejected. It was another ten years before the British Act of Parliament separating Victoria from New South Wales was signed by Queen Victoria. The New South Wales Legislative Council subsequently passed legislation formalising Victoria’s separation on the 1st of July 1851.