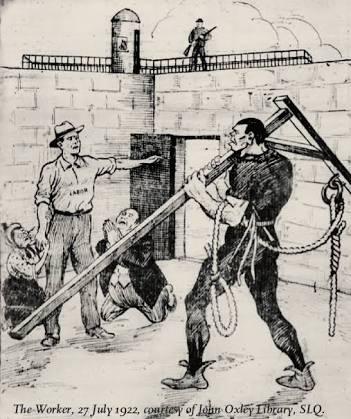 From the time the First Fleet arrived in Australia in 1788, capital punishment was a common form of punishment for both major and minor crimes. The first convict to be hanged in the new colony of New South Wales was seventeen year old Thomas Barrett. Less than a month after the colony was established, Barrett was found stealing “butter, pease and pork” and hanged in a ceremony which all convicts were forced to witness on 27 February. Capital punishment continued to be used as a deterrent to criminals, right up until the last man – Ronald Ryan – was executed in Melbourne in 1967. Two decades after Federation, Queensland became the first state to abolish capital punishment, doing so on the 3rd of July 1922. It was not until 1968 that the next state, Tasmania, abolished capital punishment.